The leg obstruction is one of the least known of the JKD techniques, but at the same time our group considers it one of the most valuable techniques in our self-defense arsenal. I think that the reason we consider it so valuable is that it was one the main techniques that Bob Bremer stressed so much every Wednesday in my garage. Bob worked with us so much on it that most of us could do it without thinking. It has become an automation reaction to any hand attack. It is now so automatic that most of us can do it against a surprise attack and without thought. “We don’t hit. It hits”, but to learn to really make it work in a real life situation you need to do two things:

1. You need to understand the value of the leg obstruction for both attacking and defending against an attack. Unless he understands the value of it, the student will not spend the massive amount of time working on it to really make it work in a real time situation.

2. Once the student understands how useful the leg obstruction really is, he will need to spend countless hours working on it. I think a lot of JKDers never really “got” it because they found it so awkward to do at first. Believe me it takes a lot of work to do it correctly. Besides having your shoulders square, you also should have your foot as horizontal as possible. While a lot of my students can do this, as hard as I try, I can never get my foot completely horizontal. My hip doesn’t seem to work that way. 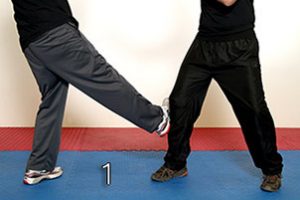 Showing author with leg obstruction on partner’s shin. You can see that it is more diagonal than horizontal. While this will work, it is better to have the foot horizontal so as to have a much of the foot as possible on your opponent’s shin so that you do not have to quite as accurate with the placement of the foot. 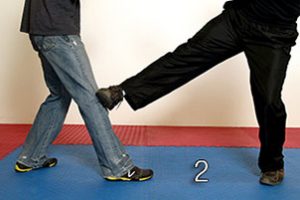 Close up of horizontal foot on shin.

Luckily even though I never got it exactly correct, I never gave up on it, and I can make it work well enough to have become one of my main tools. The Wednesday Night Group tries to spend most of our time on what we will do most of our time in combat. We feel that it is best to be able to do a few things well than a lot of things not so well. That is what Bruce Lee really meant by “daily decrease”. It is for that reason that we try to spend about 80% of our time on what we will do 80% of the time. When the crap hits the fan and someone attacks you without warning, you do not have the luxury of enough time to sift through 30 different responses to this particular type of attack. The advantage of the leg obstruction is that it will work against almost any type of empty hand attack as soon as the attacker has penetrated the fighting measure. The fighting measure can be defined as that distance that is far enough away from you that to touch you, your opponent must take a step toward you. Thus giving you the time to respond. But even if you are late to respond and the attack has not landed, the speed and basic structure of the leg obstruction can still keep you safe from the attack landing. To explain this, we need to show you the leg obstruction in action. Please give the author some slack on the foot not being completely horizontal. While I could have gotten most of our instructors to show it correctly, I felt that it might give some hope to others that even an old klutz can make it work. Even if you are a young klutz, don’t give up on working on it for the many hours it will take to get it well enough to use it. Bremer always told us to “Do it until you own it”. Someday it may save your life. 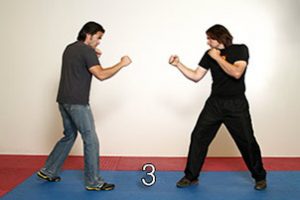 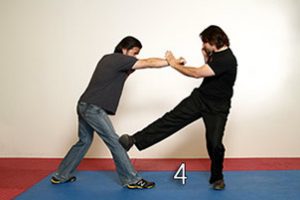 Notice on the leg obstruction that the shoulders are square. Like the support on a bridge the shoulders must be square to make the technique solid.

To test this, have your partner push on your leg obstruction with the shoulders not square and then square and see the difference in the strength of the stance. 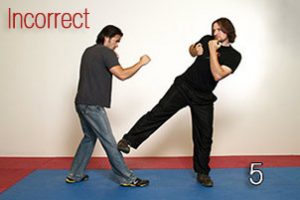 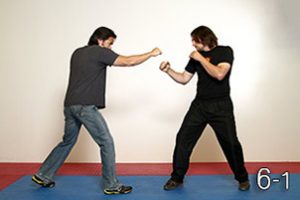 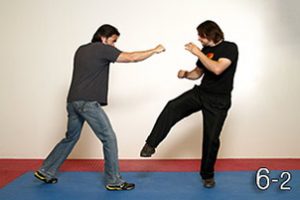 The leg obstruction halfway to target. 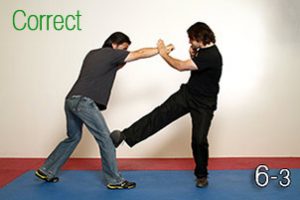 Notice that the person doing the leg obstruction has his rear hand placed at his chin. This done as you move forward to counter attack and as the leg comes forward.

Notice that the front leg has a natural bend to it and the front hand is being retracted as the front arm is reaching out to cover the centerline and help to defend against any hand attack. When contact is made the power of the leg obstruction will come from the rotation of the body as well and the snap of the kick about 2 to 3 inches into the opponent’s knee or shin.

One of the things that the leg obstruction is good for is to prevent the defender from either stop hitting or stop kicking either a hand or leg attack. 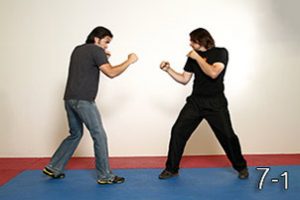 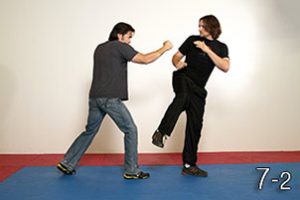 Jeremy attempts to land a side kick. 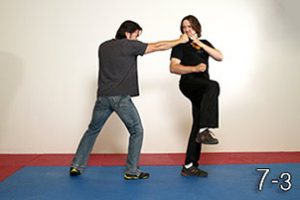 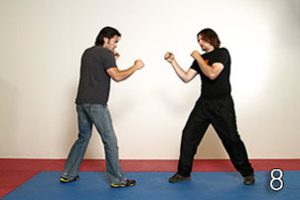 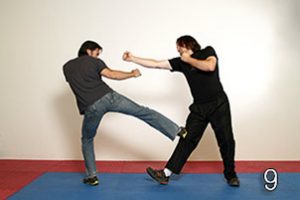 This time instead of attacking with a hand or leg attack, the attacker will use a leg obstruction, which negates the stop hit or kick. From there he can follow-up his attack. I know that a lot of people have said that trapping does not work. This is not necessarily the case. After applying the leg obstruction it is quite simple to trap and hit. If you are in a matching stance (that is if both have their same leg forward) it is quite easy to drop your weight and trap while hitting. 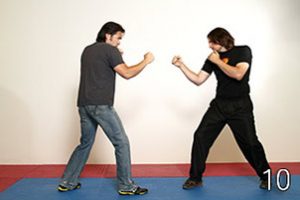 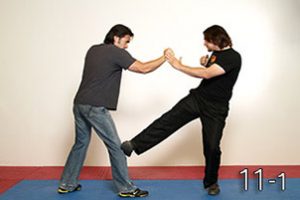 Jeremy attacks with a leg obstruction. 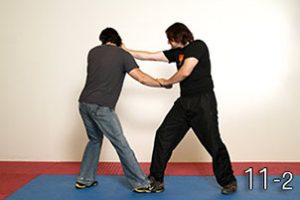 Jeremy drops his weight and traps with his rear hand while hitting with his front.

You can also trap and hit after the leg obstruction in an unmatched stance by loping (grabbing) with the rear hand and hitting with the front. 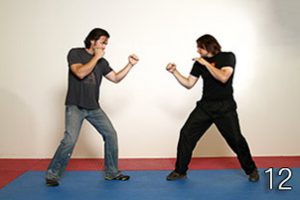 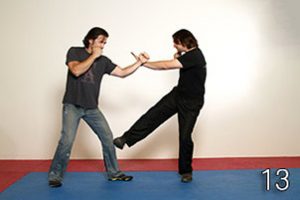 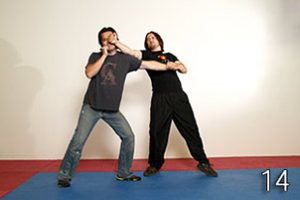 The leg obstruction is also easy to apply from a natural stance. 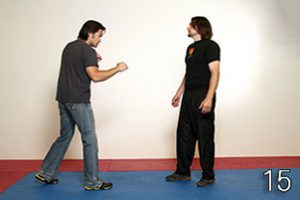 Steven and Jeremy at distance. Jeremy is in a natural stance. 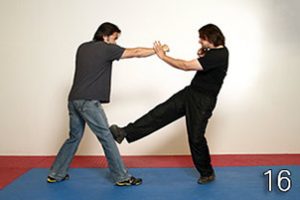 As you see from just some of the uses of the leg obstruction just how valuable a tool it is. It is not all that valuable unless you can use it from wherever you are or what stance you might happen to be in at a moment’s notice. But to be able to do that may take more effort than a lot of students are willing to put into it.