It seems from reading various Jeet Kune Do forums that there are two schools of thought on the importance of Wing Chun to Jeet Kune Do at the present time. Some believe that Wing Chun was an essential element in the development of Jeet Kune Do in the past and still is today. Another school states that Bruce Lee moved away from the Wing Chun energy drills and trapping so that JKD came to resemble a form of advanced kickboxing. It is clear from Bruce’s notes that JKD was comprised mostly from Wing Chun, Western Boxing and Western fencing. It is also clear that when Bruce Lee started teaching students in Seattle that what he was teaching was a form of modified Wing Chun. The stance and basic structure was more Wing Chun than anything else. When he was teaching in Oakland, what he taught started to resemble Western Boxing in structure as well as technique. Once in Los Angeles he added the basic fencing theory of intercepting and Jeet Kune Do was born.

Instead of focusing on crashing the line and blasting, he started focusing on maintaining distance and intercepting an attack. Instead of focusing on gaining an attachment and then trapping and hitting, he started focusing on hitting with enough speed and deception that the opponent was not able to block it. While the Wing Chun elements were still taught, they just were not emphasized as much. This was however a slow transition. Those that were learning the first year or so at the L.A. Chinatown school were working more on the Wing Chun elements in their training than those who were there the last year that the school was open, or at Dan Inosanto’s backyard school, once the Chinatown school was closed.

Even in the backyard class some people had success in sparring by crashing the line while others preferred to keep distance and intercept. Either method was considered more of a personal preference than the “way” to do it correctly. Whatever worked for you was the right way for the individual student. Some focused in their training on boxing drills and hitting the pads, some focused their training more on trapping and chi sao, some on footwork and intercepting. But at the same time all of these things were taught to the students at the Chinatown school as well as the backyard school. After Bruce passed away, some of his students starting teaching. Some were more versed in the Wing Chun elements so they focused on those. Some focused more on the boxing elements. While some on footwork and intercepting. Some also tried to work on all three. Whatever they were teaching became a set agenda and a correct way to approach combat. As Bruce Lee told Dan Lee that one of the fears he had was that his students that learned in his schools would then “take the agenda as the way”. In other words they would become stuck in whatever agenda there was and no longer bothered to do any research, experiment or test what they were teaching against other arts.

Even those who feel that Wing Chun no longer has much value need to understand that there are times and situations where straight Wing Chun elements are necessary. The fact of the matter is that in combat you cannot always be in control of distance or the environment. I remember Dan Inosanto asking his students in one of the backyard sessions, “In a fight what would you rather have a hand grenade or a knife” Most would say the hand grenade. Dan then said, “What if you were in a phone booth?”. Sometimes you need one and sometimes the other.

There are times when the Wing Chun elements maybe essential to your survival. Let’s take the 4 corners from Wing Chun as an example:

If you are in a matched ready stance at the fighting measure, you may be able to intercept your opponent’s attack. 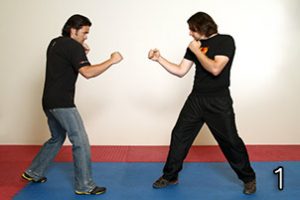 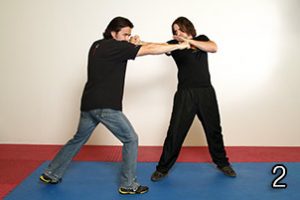 Steven steps forward with a jab attacking to the high inside gate. Jeremy angles right and hits with a straight lead punch.

In the example above we are using the Wing Chun 4 corner principle within a JKD structure.

If you are in an unmatched stance, it may be more efficient to counter his jab with a sliding leverage principle from Wing Chun. 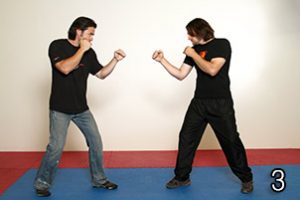 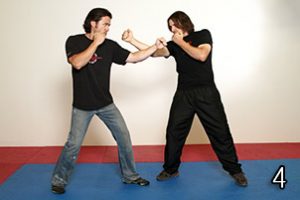 Steven starts to step forward with jab to the high inside gate. Jeremy starts to intercept with sliding leverage. 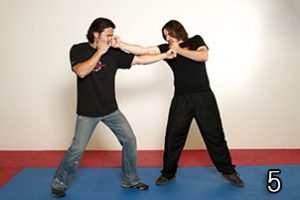 The punch has contacted the attacker’s nose.

Here we see a another example of Steven and Jeremy people facing each other in an unmatched stance. 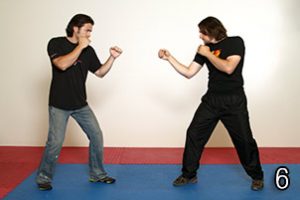 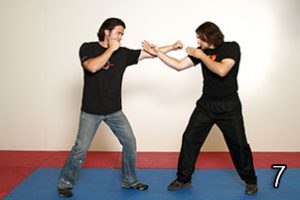 Steven throws a left jab to high outside gate. 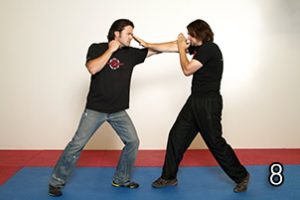 When an opponent strikes to the outside gate and you are going to use inside sliding leverage, to be successful you will have to use a square shoulder sliding leverage finger jab attack to the same eye as the attacking arm. This will give you the leverage advantage. It is in a case like this that knowing some Wing Chun will come in handy. 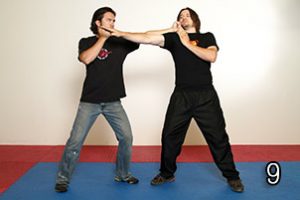 Incorrect structure. Shoulders are not square. 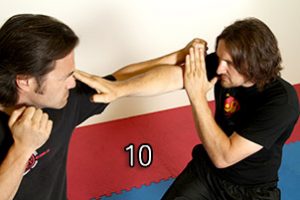 If you are unfortunate enough to be attacked, you may be in a crowded place and your attacker may be close to you, or your awareness is not there and you have let a possible attacker get to close to you, you are not in any kind of stance. Most of the time when someone is attacked they are usually taken off guard. We seldom are able to have the time to get in a fighting stance. Most of the time such a stance may appear too aggressive and give out to much information. Instead of jumping into a stance at the first sign of trouble and loudly announcing that you are a black belt, we try to teach our students to appear non-threatening. We find it best and try to teach our students that no matter where they are that they should have a natural stance with their strong foot forward. Below we see 2 people both in a ready stance and at the fighting measure. 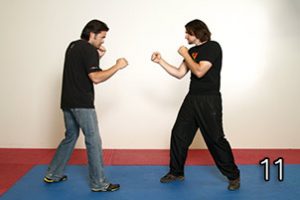 Steven and Jeremy both in a ready stance and at the fighting measure. 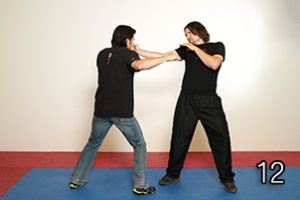 Steven steps in with a hook punch. Jeremy intercepts with a straight lead punch.

Unfortunately you may be caught unaware and be too close to your opponent to intercept with a long-range punch, and you may have rely on the square shoulder Wing Chun punch. 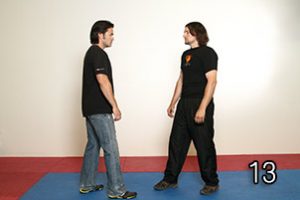 Steven and Jeremy at close range in a natural stance. 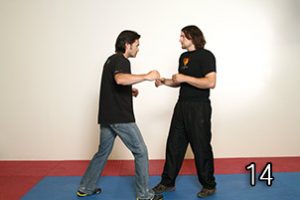 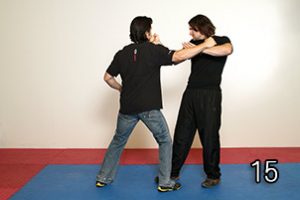 While this may be enough to finish the fight you may need to straight blast from the Wing Chun elements of JKD or follow up with Western boxing strikes until your opponent is no longer a threat.

In the first examples above we were using Wing Chun self defense principles while using a JKD structure. In the example of the inside sliding leverage we are show a Wing Chun technique purely from a Wing Chun structure. The final example shows that when an opponent is too close to you, Wing Chun may be the best solution. While these are just a few examples of the usefulness of the Wing Chun elements in JKD, we hope you understand that there are many more examples that we could have come up with. Remember Wing Chun is a close range art, and since we cannot always dictate what range we are going to be in, knowing some of the elements of Wing Chun may be what you need to survive. We believe that knowing the basic elements of Wing Chun is essential to understanding and being able to apply Jeet Kune Do.